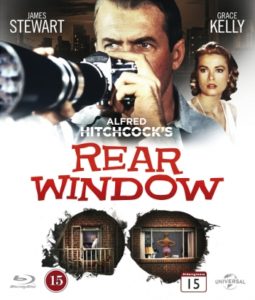 Learning English from the movies is a great way to improve your language skills. You’ll have fun watching the film, and you’ll also learn lots of useful words and expressions. Plus, you’ll improve your listening skills!

One great thing is to watch a film you’ve already seen in your own language. Then, as you already know the story, you can concentrate on understanding the dialogue. So, just to help you learn English from the movies, we’re looking at a scene from a classic film: Rear Window.

Rear Window is a 1954 film that was directed by Alfred Hitchcock. It stars James Stewart and Grace Kelly. Jeff Jeffries 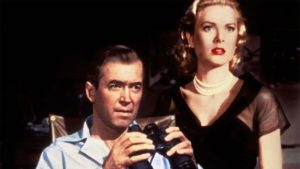 (played by Stewart) is a photographer who has to stay at home in a wheelchair after breaking his leg. To pass the time, he spies on his neighbours through his back window. One day, Jeff thinks he sees a murder in a neighbouring apartment. He decides to try to solve the mystery.

Before watching the video clip, here are some useful words that will help you understand it.

A chair (with little wheels) for people who can’t walk 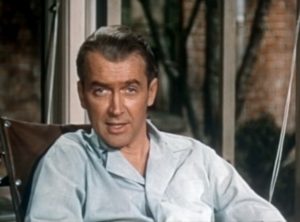 If you “settle down”, you get a job, get married and start living a stable life

If you “sit around”, you stay in one place (sitting) without doing anything

Literally, “to fence” is to fight with swords (long, sharp weapons). If you “fence” with words, you play with them

Someone who is “maladjusted” has mental/psychological problems

A person who is very different from other people

Loaded to your fingertips with something

If you’re “loaded to your fingertips with” something, you’ve got a lot of that thing (love, in this case)

You’re going to watch a clip from the film Rear Window. In this scene, Jeff’s nurse (Stella) tries to convince him to settle down and marry Lisa, his girlfriend.

Watch it once. Does she convince Jeff to get married?

PS It’s important to watch the clip once without stopping. While doing this, you should try to understand as much as you can. Don’t worry if you don’t understand everything – just try to get the gist of what they say (a general understanding of it). It’s very important that you try to do this. It’ll really help with your listening skills.

Now, watch the clip again and answer the questions. This time you can stop the video and play it again as many times as you like. [answers below]

Now watch the video and read the script (see below) at the same time, or simply activate the subtitles. This is great for your listening skills!

In pairs, either recreate the dialogue from notes, or invent a new one in which Person A is trying to give Person B some relationship or marital advice. Make notes for your part, and practise in pairs. Then, when you’re ready, perform your mini-dialogue in front of the class, or to a friend or teacher. Remember, only look at your notes – don’t read out the script word for word. This is great for your speaking skills!

Stella: Look, Mr Jeffries, I’m not an educated woman but I can tell you one thing – when a man and a woman see each other, and like each other, they ought to come together – wham – like a couple of taxis on Broadway. Not sit around analysing each other like two specimens in a bottle.

S: Intelligence! Nothing has caused the human race so much trouble as intelligence. Ha! Modern marriage.

S: Baloney! Once it was: see somebody, get excited, get married. Now, it’s read a lot of books, fence with a lot of four-syllable words, psychoanalyse each other until you can’t tell the difference between a petting party and a civil service exam.

J: Well that’s fine, Stella. Now would you fix me a sandwich, please?

S: Yes, I will. And I’ll spread a little common sense on the bread. Lisa’s loaded to her fingertips with love for you. I got two words of advice for you: marry her.

J: She pay you much?

No, she doesn’t convince him to get married.

For another opportunity to learn English from movies, check out our lesson on The Wizard of Oz.