Guerrilla marketing!
You’re going to listen to an article on guerrilla marketing. The objective of guerrilla marketing is to do something unusual or spectacular so people talk about your product or brand, or so it gets in the news. After doing the listening activities, scroll down for the script and listen again while you’re reading the text (this will develop your listening skills). Finally, do the quiz to test your knowledge.

This is a free sample from our Business book series, for more information on how to improve your Business English please visit https://learnhotenglish.com/product/business-english-e-book/ 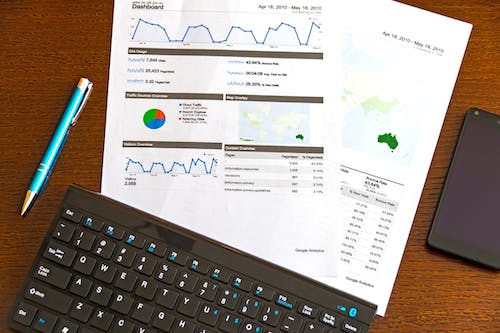 Listening II
Listen again, pausing the audio if you want. Then, write the name of a company or organisation next to each sentence. Scroll down for the answers.
1. They dropped strips of pink paper from the top of a building.
2. They transformed bus stops into rooms.
3. They paid the town of Halfway to rename itself.
4. They stuck coins on the ground.
5. They gave tents to homeless people.
6. They set up a water vending machine with “contaminated” water.

7. They covered parking meters in Paris with jeans.

Quiz
After reading over the script and glossary below, try the quiz to see how many words you can remember!

GUERRILLA MARKETING
Unusual ways to promote a product.
What’s the best way to promote a product? Advertising? Personal selling? Shop demos?
Guerrilla marketing techniques are becoming more and more popular. But what do they consist of? [Scroll down for the glossary.]
The objective of guerrilla marketing is to create a buzz… to get people talking about your product… to get it in the news whilst spending as little as possible – inexpensive, small-scale stunts that attract massive amounts of attention.
Here are a few examples of guerrilla marketing.

1. In 2007, Swedish furniture giant IKEA transformed bus stops in Manhattan into furnished “rooms”, giving people a comfortable place to sit while they waited to get home. Reports of the stunt appeared in all the major newspapers. 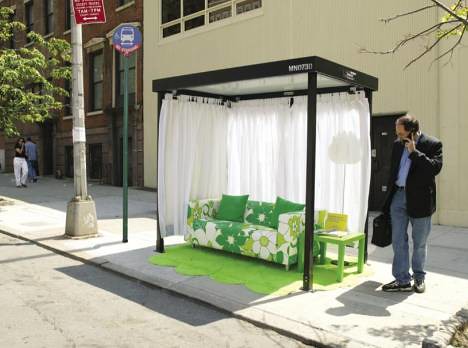 2.  In 2009, Libresse dropped more than 3,000 gift packs of tampons on Dutch beaches. The packs floated down on pink parachutes. The event was reported widely in the press.

3. Loctite stuck coins on the ground to demonstrate the effectiveness of their Super Glue 3 brand. The coins had stickers on them advertising the product.

4. Lee Jeans covered parking meters and manhole covers in Paris with jeans to promote the opening of a new store. With so much denim around the city, the launch was a major success.

5. UNICEF set up a water vending machine filled with bottles of “contaminated” water to raise awareness of the lack of clean water in many countries. “Diseases” on offer included malaria, cholera and typhoid.

6. Italian newspaper La Gazzetta Dello Sport dropped millions of strips of pink paper from the top of a building in Milan to promote the newspaper… which is printed on pink paper.

7. As part of a Carlsberg campaign, £10 and £20 notes were left around London. Each note had a removable sticker attached to it which read, “Carlsberg don’t do litter. But if they did, it’d probably be the best litter in the world”. The campaign created massive media interest… and thousands of Londoners desperate to pick up the “litter”. 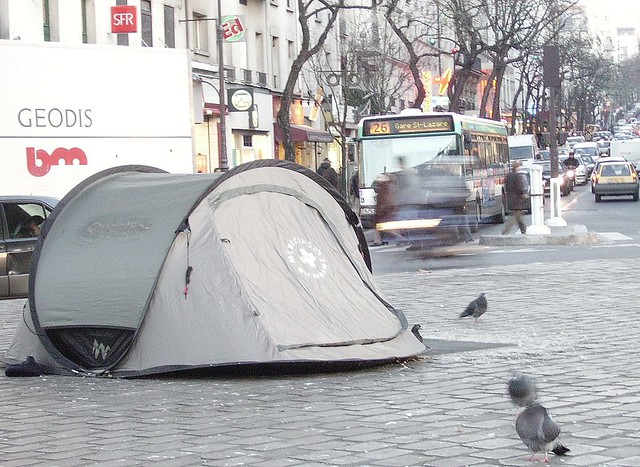 8. Médecins du Monde distributed hundreds of tents to homeless Parisians sleeping along the Quai d’Austerlitz and Canal Saint- Martin. All the tents had the Medicins du Monde logo on, and drew attention to the number of destitute people in the area.

9. In 1999, the town of Halfway (Oregon) was paid $100,000 to rename itself Half.com for a year. Within two weeks, news of the name change had appeared on the Today show, the Wall Street Journal and The New York Times. Three weeks later, Half.com was bought by eBay for $313 million – one of the biggest advertising returns ever.

10. In order to promote the release of The Simpsons Movie, a giant, 60-metre Homer Simpson was painted right next to one of the UK’s most famous landmarks: the Cerne Abbas giant, which is carved into a chalk hillside in Dorset. News of the event was published in all the major newspapers. 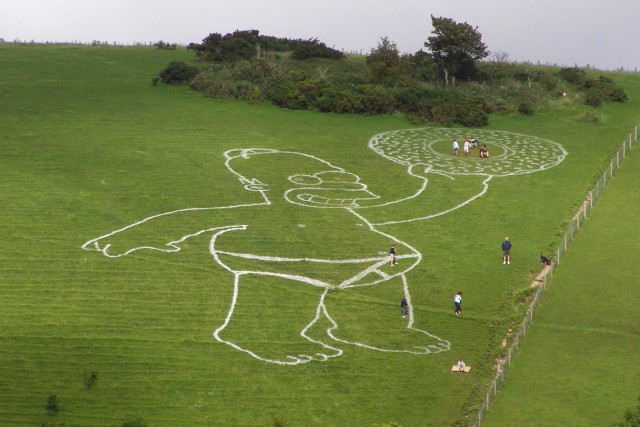 Watch out for some guerrilla marketing in a town or city near you!

Glossary
to create a buzz exp
to get people very interested in something so that everyone is talking about it
a stunt n
an action designed to attract attention
to drop vb
if you “drop” something, you let it fall
a gift pack n
a box or container with little presents inside
to float down phr vb
if something “floats down”, it falls from the sky and comes down slowly and gently
a parachute n
a device that allows a person to jump from an aircraft and float to the ground. It consists of a large piece of cloth attached to your body with strings
to stick vb
if you “stick” A to B, you use glue or another substance to attach A to B
a parking meter n
a machine that gives you a ticket if you put money in it. The ticket shows you how long you can park your car in a specific
parking zone
a manhole cover n
a round, metal cover for a hole in the street. The hole leads to the sewage system (the underground water system)
a water vending machine n
a machine that sells bottles of water
to raise awareness of exp
to make people know about
a strip (of paper) n
a small, thin piece of paper
a note n
an amount of paper money
removable adj that you can
take off / remove
homeless adj
with no home or place to live
to draw attention to exp
to attract attention; to make people look at / notice
a return n
a profit
a landmark n
a well-known object or feature in a city / town / landscape
to carve vb
to create a design / image / picture by cutting and shaping a hard material such as stone / wood / metal, etc.
chalk n
a soft white limestone (calcium carbonate). Some teachers use a piece of it to write on a blackboard
a hillside n
the side of a hill (a small mountain)

This has been a free sample from our Business book series, for more information on how to improve your Business English please visit https://learnhotenglish.com/product/business-english-e-book/