How to learn better English.. the fun way: the pantomime!

There’s an unusual British tradition that takes place every year at Christmas called the pantomime (often referred to as the “panto”). A pantomime is basically a Christmas theatre play that’s popular with both children and adults.

If you ever find yourself in Britain around Christmas time, you should try to go to one.

Here are 6 key elements of a typical pantomime. 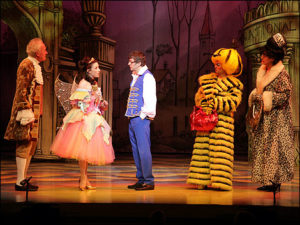 Most pantomimes are versions of children’s stories. Typical stories include Jack and the Beanstalk and Cinderella. The plots for these tales are very simple and very well-known by most people, especially because many of them have been made into Disney movies.

One of the key characters in any pantomime is the “dame”. This is usually a man who is dressed up as a woman. It’s obvious to everyone that she is a “he”, but that’s all part of the fun. Other key characters include the handsome prince, the baddie (the really evil character) and an animal (for example a cow in Jack and the Beanstalk). The handsome prince is usually a woman dressed as a man. And the animal is made up of two people inside a cow or horse costume. Another important character is the Fairy Godmother. She’s got magical powers and she often helps the hero or heroine.

Another important aspect of any pantomime is audience participation. This is when the audience start shouting things out to the characters on the stage. For example, they might shout, “Hello!” every time the dame comes on stage, or “Boo!” when the baddie (the bad person) appears. The audience will also help the dame find things, or warn her when one of the baddies is on stage and she hasn’t seen him. For example, if the baddie is behind her and she hasn’t seen him, the audience will shout, “He’s behind you!” The dame will then turn around, trying to see who’s there, but missing him every time. The audience love this.

Watch a clip from a typical pantomime, complete with lots of screaming and shouting from the audience! If you feel like joining in, it’s, “He’s behind you!”

Throughout the pantomime there are often lots of jokes. These are often very corny (bad) ones, but it’s all part of the fun. For example:
Character I: What did the sea say to the sand?
Character II: Nothing, he just gave a little wave.

Or: “I used to be a bus driver, but I had to give it up. I can’t stand people talking behind my back.” 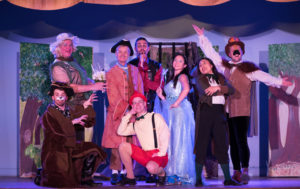 And:
Character I: May I kiss your hand?
Character II: Why? Is my face dirty?

And there are often references to current events or famous people. For example:
Character I: I’ve come from Paris.
Character II: Paris, France?
Character I: No, Paris Hilton.

There are usually songs that the audience will recognise and can join in on. And the actors often dance and sing themselves.

There is often ‘a chase scene This is when the baddie runs after some of the characters in the play. The chase usually ends with all the characters falling down on top of one another. And at the end there’s usually a fight with the baddie, which the goodies win, of course. 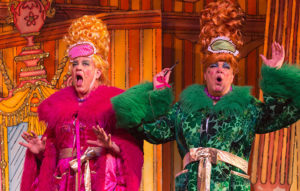 See you at the pantomime!

Please share this post with others so they can learn better English with this fantastic British tradition!

More on British & US culture with Learn Hot English magazine!