When was the last time you talked about a friend… behind his or her back?

What did you say about him or her?

Did you pass on any juicy (interesting) information about their private life?

We all enjoy a bit of gossiping (talking about other people) every now and then, don’t we?

In this fun lesson, you’re going to learn GOSSIP vocabulary, useful expressions for talking about other people.

Then, you’re going to listen to a conversation and answer some questions.

Finally, you can do a quiz to see if you can remember the words.

By the way, conversations are a GREAT way to learn a language. Why? Because the language in conversations is the type of language that you can use when you’re speaking English too! So, are you ready? OK, let’s go! 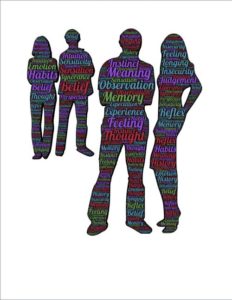 If you’re “curious” about something, you really want to know about it. For example, “I’m curious to know who he’s going out with now.”

The things that someone is “up to” are the things they’re doing, or they’ve been doing lately. For example:

“Is she still with Pete?”

Information about someone’s private life. Also, a verb, to gossip. For example:

“I have a bit of gossip about Jessica.”

Remember, we use the verb “to tell” with an object (me, you, them…). For example:

“I told her about Mike and his new girlfriend. / Don’t tell anyone what I told you. / She told Pete the secret.”

And we “say” something. So, “say” is followed by either a noun or a full sentence. For example:

“I said I was hungry. / He said it was the correct answer. / I said the wrong thing.”

6 To move in together

If a couple move in together, they start living together in the same house. For example:

“They want to move in together.”

If a couple “break up”, they stop having a relationship. For example:

“They broke up after a six-month relationship.”

8 Never would have imagined

You’re going to watch a conversation with Terry and Stephanie. They’re talking about their friend, Pete. Watch the video and answer the questions. Remember, for the first time, you should watch the video from start to finish without stopping and try to understand as much as possible. After that, you can watch it again, pausing or stopping it wherever you like. [answers below]

Now watch the video and read the script (see below) at the same time. This is great for your listening skills!

Try our little language quiz to see how much you can remember. [answers below]

Complete the sentences with the correct words from below.

Stephanie: So, I’ve been meaning to ask you, have you talked with Pete at all recently? I’m just curious to know how he’s doing.

Terry: Actually, actually, no I haven’t spoken to Pete in ages, but we do keep in touch with social media, like Facebook and Instagram, so I know he’s doing well but we haven’t actually spoken.

T: Well, he left his job in the supermarket and he’s changed to a big bank. And, so, he’s very happy with his new job because it’s more stable; he’s travelling abroad a lot for meetings and conferences, so in this aspect he’s very happy.

S: My gosh, that’s so great, erm and is he still… what was her name? Sarah? Is he still with Sarah?

T: He and Sarah broke up, but now he’s with Jenny, who is Mark’s ex-girlfriend. [Yes! I remember.] So, don’t tell anyone.

S: Oh my God, Pete! I never would have imagined this; he sounds like he’s doing great!

S: Oh my gosh, I’m going to try to find him on Facebook and reach out.

It´s a great time of the year to get an annual subscription to our monthly magazine LEARN HOT ENGLISH, you will learn a lot of things that you can’t find in standard books and at just 37,99€ for 12 action packed magazines the price is RIGHT too!