Do you know how to tell a story in English?

How to tell a story: 4 useful expressions! 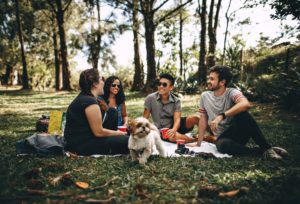 Do you know how to tell a story in English? When was the last time you told a story in English? Telling stories is a great way to participate in a conversation. So, in this lesson we’re going to teach you 4 really useful expressions so you can tell better stories! First, you’re going to listen to a conversation with Josh and Casey. Josh is telling Casey a scary story.

Then, we’ll teach you the 4 expressions. Finally, you can do an exercise to see how much you can remember. OK?

[see below for the video script]

What was making the noise that frightened Josh?

What was making the noise that frightened Josh so much? OK?

OK, did you hear the answer? It was a tree that was making the noise that frightened Josh so much. Did you get it? I’m sure you did.

OK, now we’re going to learn the four expressions. As I say them, try repeating them after me. This is very good practice for two reasons. Firstly, as you repeat them, you’re remembering them, you’re making an effort to memorize them. Secondly, it’s very good for your pronunciation. OK?

“I ended up staying a little longer,” Josh said. If you “end up” doing something, you do that thing in the end. For example, “At university, I started studying biology, but I ended up studying history,” which means I studied history in the end.

“I wanted to see what was going on,” Josh said. The things that are “going on” are the things that are happening. For example, if you hear a noise upstairs, you could go up there and say, “What’s going on? What’s happening?” It’s a very useful phrase or verb.

Josh said, “I got an umbrella to defend myself.”

If you “find out” information, you discover it, or understand it. For example, “I thought she was French, but I found out that she’s actually Italian.” So, to find out means to discover, or to learn, or understand, OK? So there are the four really useful expressions that you can use when you’re telling a story, OK?

Try our little language quiz to see how much you can remember. [answers below]

Complete the sentences with the correct words.

A: So, what did you get up to last night?

J: Last night I went to the cinema with some friends, ended up staying a little later than I

should have… of course, they’re crazy people. And then I came home and I had a bit of

this, a bit of a fright. What happened was, I came in the house, and started hearing all

upstairs. So, the neighbours are sometimes noisy, so I thought maybe it’s them, but the

noise continued so I went up to knock on the door to see what’s going on, the

neighbours weren’t there, came back down and it continued, so I thought that maybe

there’s someone in the building or in my house…

J: I got an umbrella, to defend myself, like back off.

A: OK, it’s the closest thing you have.

J: Yeah, it’s gonna do some damage. And then, I went in the kitchen to look, and there

was the problem, it was just a tree, blowing in the wind in on the window.

A: And you got your umbrella for it.

J: And I was there with my umbrella like an idiot and it was just a tree.

A: I probably would have done the same thing – freaked out.

A: My God. So, you must have slept like a baby after you found out it was just a tree.

J: Yeah, exactly. With my umbrella.

A: Yeah! What a scare though, oh my God!

J: Yeah, it was alright though.

We hope you enjoyed our blog post “Do you know how to tell a story in English”?