Learn about Sports in the USA – US culture 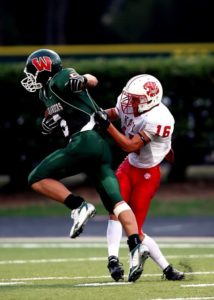 Sports in the USA are an important part of the culture, but there are 3 that really stand out: American Football, basketball and baseball.

In this short video lesson on US culture, you’ll learn about the importance of these 3 sports. You’ll also learn some useful words for talking about this topic. Happy learning! 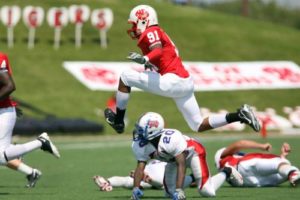 A game played in the US with a ball that is similar to a rugby ball. Americans refer to “ordinary” football as “soccer”.

A championship game between the two best American Football teams that is held in February.

To root for a team

If you “root for a team”, you support that team and you want it to win: “We were rooting for the red team.”

A fixed period when a sport is played. The American Football season is from September to January.

A “wing” is a part of a bird’s body that it uses to fly. Chicken “wings” are often served with a hot, spicy sauce. 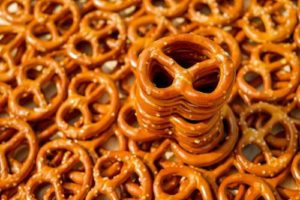 A type of salty bread snack in the shape of the letter “8” (more or less).

A short video with information about a product that you can buy.

The period during the month of March when the college basketball tournament takes place. This tournament is organized by the NCCA = the National Collegiate Athletic Association.

To come out on top

If your team “comes out on top”, it wins a tournament, or a part of this tournament.

If you “tune into” a TV or radio station, you watch or listen to it.

A type of diagram showing the teams playing in a tournament. People use a “bracket” to predict which team will win each game.

You’re going to watch a video with someone talking about sports in the USA. Watch it once and answer the questions below. [answers below]

Ali: Hi, I’m Ali. I’m a college student from Pennsylvania, and today I’m going to be talking about American sports. Arguably the most popular sport would be Football. Everyone has their favorite team, their favorite player, and they usually root for them all the way up to the Superbowl.

The Super Bowl happens in, at the beginning of February, and it is the two teams that have done the best throughout the football season against each other. Everybody has a Super Bowl party where people bring little snacks like wings and pretzel bites, and they get together, and they watch the Superbowl. A lot of people only watch the Super Bowl for the commercials though, so many companies produce their best commercial of the year during the Super Bowl. The next most popular sport is probably basketball.

The next most popular sport is probably basketball. During March Madness everyone creates their own “bracket” to predict what team they think is going to come out on top in the college or in the pro basketball leagues.

And finally, baseball is also really important to American culture. The World Series… a lot of people tune into the World Series. Erm, it’s like a Super Bowl but for baseball, and it’s a series of games rather than just one game that determines who’s going to win the World Series.