U.S. culture: Learn about Tex-Mex food in the US! 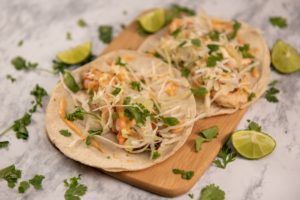 Mexican food in the US

What are some typical dishes from your country?

The US has influences from all over the world. This often leads to incredible combinations of food, such as Tex-Mex.

This type of cuisine originated in Texas (in the south of the US) and combines Mexican and American ingredients. But what is it exactly?

In this short video lesson on US culture, you’ll find out about Tex-Mex food. 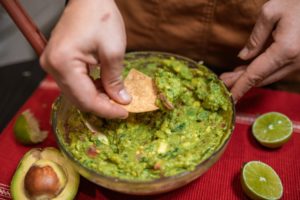 You’ll also learn some useful words for talking about this topic. After watching the video, try our little quiz below to see how much you can remember.

“Indigenous people” are the people from a country who have always lived there – they didn’t arrive from other countries.

“Dairy products” are milk products such as cheese, butter, yoghurt…

“Yellow cheese” is a white, yellow or orange cheese that can range from mild to strong. Examples include cheddar cheese.

“Guacamole” is a Mexican dish that consists of avocado (a green vegetable with a hard, round stone in the middle) mixed with onion, salt, pepper, tomato and lime juice.

A “recipe” is a list of ingredients with instructions on how to prepare a type of food.

“Clam chowder” is a soup made from clams (sea creatures with hard shells), potatoes, onions, milk and cream.

Something “diverse” has many different things in it. A “diverse” country, for example, has people from different parts of the world.

In cooking, the “ingredients” for a dish is a list of the food you need to make the dish.

A piece of thin, flat bread that is made from corn and eggs.

“Tacos” are tortillas filled with meat and sometimes vegetables such as onions and tomatoes.

A “hard-shell” taco is crispy not soft.

“Quesadillas” are tortillas with cheese and some vegetables.

If you “grill” meat you cook it quickly over a very high heat.

“Fall” is the US English word for autumn: the months of September, October and November.

“Chili con carne” is a dish made with meat, tomato and chili. It is often served with rice.

A “pie” is a dish that consists of meat, vegetables or fruit (such as apples or pumpkin) inside pastry (a mixture of flour, water and butter).

You’re going to watch a video with someone talking about summer jobs in the US. Watch it once and complete the sentences with the correct words. [answers below]

Mexican and American Food (including Tex-Mex)

Hello, my name is Victoria, and I will be talking about the differences between Mexican Food and American food.

Mexican food has most of its influence from the indigenous people from Mexico. It is also true that there is a lot of Spanish influence as well. For example, the dairy products used in Mexican food are part of the influence that came from Europe.

The spices (which are very characteristic in Mexican cuisine) have West African influences as well as Asian. Mexican food uses coriander (cilantro), cacao, oregano and white corn. Yellow cheese is never used. Hard shell tacos are not common at all.

The most common Mexican dishes include tacos, guacamole, and quesadillas.

Some food that originated in the US include the cheeseburger, Buffalo wings, and many recipes for pizza. However, since the US is a very diverse country, there are many foods that could be considered typical depending on the community that you visit. In the northeast, for example, I have noticed that the clam chowder is very common, as well as the apple pie and pumpkin pie (especially during the fall and winter months).

Fajitas and chili con carne are Tex-Mex; they were created here in the United States, not in Mexico.

When I first arrived in the US, I was very curious about trying Tex-Mex food, and today, I can say that my favorite dish is fajitas.

Fajitas are grilled pieces of meat on a flour tortilla. Sometimes a corn tortilla is used as well. It is also common to add stripped peppers and onions to the tortilla.