Learn about Thanksgiving – 10 things you really should know!

Have you ever heard of the festival Thanksgiving?

It’s really popular in the United States, and it’s an extremely important part of their culture. In this lesson, I’ll be telling you a few interesting things about the festival, as well as some Thanksgiving trivia, quotes, poems and jokes. Then, by the end of this lesson, you’ll be able to talk about Thanksgiving perfectly!

Learn about Thanksgiving – 10 things you really should know!

Thanksgiving is celebrated on the fourth Thursday of November. And as it’s on a Thursday, many schools and companies close on Friday, so people get a nice long holiday.

As part of the celebrations, Americans meet with their families and close friends for a very special meal. The origins of this go back to the 17th century when, in Plymouth, Massachusetts, pilgrims and Native Americans had a three-day feast to give thanks for the good harvest that year.

Many people have their Thanksgiving dinner around two in the afternoon. 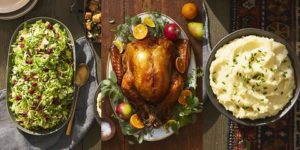 Then, they watch an NFL (National Football League) game on television. Other popular activities include watching a parade, such as the famous Macy’s Thanksgiving Day Parade in New York City.

So, what do people eat? Well, most Americans have a roast turkey as the centre piece of the meal. This is typically served with stuffing and cranberry sauce, as well as mashed potatoes, gravy and sweet corn. For dessert, there’s a pie. Very often it’s made of pumpkin, but it could be an apple, cherry or blueberry one too. The pie is usually served with cream or ice cream. 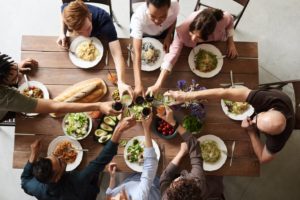 Thanksgiving Day is also known as Turkey Day, T-Day (an abbreviation of either “Thanksgiving” or “Turkey”), or Macy’s Day (exclusive to New York City).

Goose and duck are also popular instead of turkey.

On the West Coast of the United States, crab is common as a main dish.

Vegetarians have tofurkey, which is made from tofu.

Italian-Americans often have lasagna on the table, and Ashkenazi Jews may serve “noodle kugel”, which is a sweet dish. 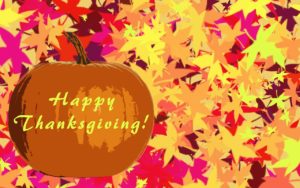 “God gave us our relatives; thank God we can choose our friends.” Ethel Watts Mumford.

“Thanksgiving is a traditional American holiday where families all over the United States sit for dinner at the same time: half-time.”

“To our national birds, the American eagle and the Thanksgiving turkey,
May one give us peace in all our states, and the other a piece for all our plates.”

“An optimist is a person who starts a new diet on Thanksgiving Day.” Irv Kupcinet. 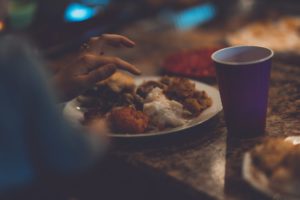 May your stuffing be tasty, may your turkey be plump,
May your potatoes and gravy, have nary a lump,
May your yams be delicious, and your pies take the prize,
And may your Thanksgiving dinner, stay off your thighs! 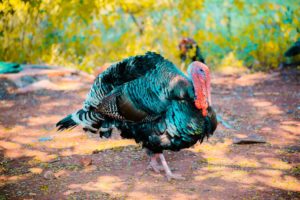 It’s the day before Thanksgiving, and the butcher is just locking up when a man begins pounding on the front door. “Please let me in,” says the man desperately. “I forgot to buy a turkey, and my wife will kill me if I come home without one.” “Okay,” says the butcher. “Let me see what I have left.” He goes into the freezer and discovers that there’s only one scrawny turkey left. He brings it out to show the man. “That one is too skinny. What else you got?” says the man.
The butcher takes the bird back into the freezer and waits a few minutes, then brings the same turkey back out to the man. “Oh, no,” says the man, “That one doesn’t look any better. You’d better give me both of them!”

In our magazine Learn Hot English you can at the same time as learning English interesting insights into different English speaking cultures and traditions.