Learn some rude words in English!

In this class, you’ll learn some rude, or you could even say bad words in English from street, road and place names.

Some people are cheekier* than others and find rude words absolutely hilarious, others less so, but whatever your inclination, knowing rude words gives you a far better level of English comprehension and general understanding of a language and it´s people.

*to be cheeky -showing a lack of respect or politeness in a way that is amusing or appealing.

Remember, for lots of great English class materials and a FREE gift, visit our homepage: www.learnhotenglish.com

How many rude words do you know in English? Learning them is useful as they’re often used in conversations. So, this will help with your listening skills. Funnily enough, many street, road and place names in English-speaking countries have obscene names in them. Let’s look at a few of them! 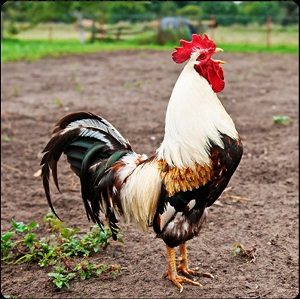 There’s an alleyway in London called Cock Hill. As you may know, a “cock” (also, cockerel) is a male chicken. However, it’s also a slang term for a man’s private part. “Cock” can also be used as an insult to say that someone (usually a man) is stupid, bad, idiotic, annoying… 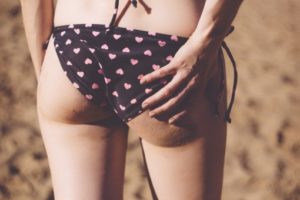 Backside Lane is a road in Oxfordshire, in the south of England. Literally, your “backside” is the part of your body that you sit on. Other terms for this area of your body include bottom, botty or booty (US English)!

“She smacked him on the backside!” 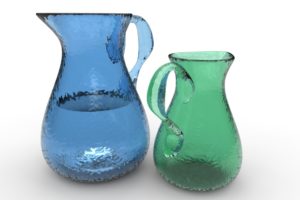 Juggs Close is a road in East Sussex, a county in England).

A “jug” is a container for liquids. However, the plural form (jugs) is also a British slang term for a woman’s breasts. 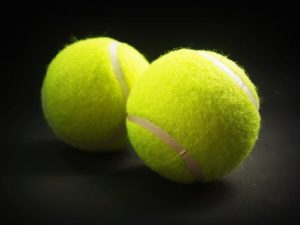 Sandy Balls is the name of a campsite and caravan park in the New Forest, England. As you know, balls are round, inflated objects you can play with. However, they’re also the two circular things that are part of a man’s reproductive system.

“He got kicked in the balls!” 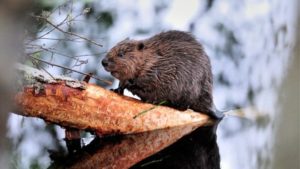 Beaver Close is a road in Surrey, a county in southern England. Literally, a “beaver” is a furry animal that builds dams in rivers. However, it’s also a slang term for a woman’s private parts, or a (sexist) way of referring to women in general. 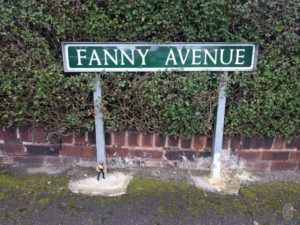 Fanny Avenue is a road in Derbyshire, England. “Fanny” is an abbreviated form of the woman’s name Frances. However, in British English, it’s also a slang term for a woman’s private parts; and in US English, it’s the part of your body that you sit on.

“She slipped and fell on her fanny!” [US English] 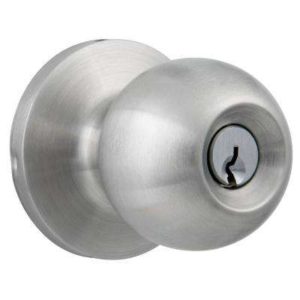 Nob End is an area near Bolton in the north of England. The common definition of a “knob” is the part of a door that you turn when you open it. However, “knob” is also a British slang term for a man’s private part, or a word to describe an annoying person.
“He can be a bit of a knob sometimes.” 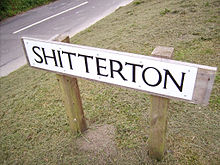 Shitterton is a village in Dorset, in the southwest of England. In slang English, the verb “to shit” means to go to the toilet; or it can refer to what is produced in the toilet (see picture). If you describe something (or someone) as “shit”, you’re saying that it’s very bad.

“That film was shit!” 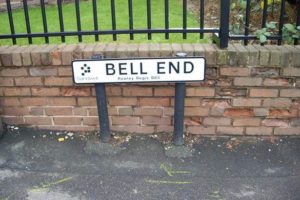 Bell End is a village in Worcestershire, England. As you may know, a “bell” is a metal object that makes a ringing sound when you shake it. However, a “bellend” is also a British slang term for the end part of a man’s reproductive organ, as well as being a slang term for an annoying person:

For more rude words, you need to check out our magazine, Learn Hot English